North Carolina Central University (NCCU) senior social work major Tymia Atkinson has been recognized for outstanding leadership and service by the North Carolina Campus Compact, a statewide network of colleges and universities with a shared commitment to community engagement.

Atkinson is a recipient of the network’s Community Impact Award honoring a student leader at each member school. She is one of 37 students chosen by their campuses for the 2020 honor and joins more than 250 college students recognized by the network since its development in 2006.

Her nomination cited Atkinson’s efforts in the successful coordination of collection drives for school supplies and food.

“Tymia’s impact can be felt on campus and in the local community,” said Calleen Herbert, director of NCCU’s Office of Community Engagement and Service. “She leads through active engagement for important causes.”

The Alexandria, Va., native helped to raise funds and gather food and school supplies for the NCCU Campus Pantry, local schools and victims of Hurricane Dorian.

“Doing work that is important to the community, my peers and myself is what drives my desire to be a servant leader,” Atkinson said. “This award reminds me that the time and effort I provide is well worth it.”

As president of NCCU’s Social Work Society, she led a response to student mental health needs with a social media campaign for mental health awareness.

Atkinson’s efforts also include civic engagement initiatives to increase voter education and engagement for the campus community. During the 2020 General Election, she served as a student ambassador for the university’s newly formed Civic Engagement Working Group.

She aspires to a career as a legal advocate and case manager specializing in domestic violence and sexual assault cases.

Atkinson and other Community Impact Award winners were honored on Nov. 13 during the organization’s virtual Engagement Matters Student Awards Ceremony.

The North Carolina Campus Compact is the state affiliate of the National Campus Compact Organization, designed to support colleges and universities in producing civically engaged graduates and strengthening communities. NCCU is a founding member of the network that was established in 2002 and is hosted by Elon University. The statewide network includes 37 public and private community colleges and universities. 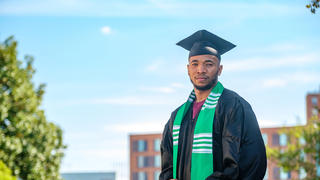 Ini-obong Obot, a native of Nigeria, will complete his studies at NCCU after earning two master’s degrees. 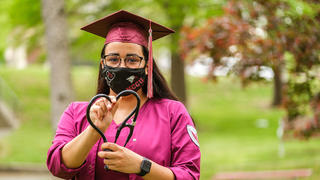 Yedaliz Llanos entered NCCU as a transfer student. In addition to her studies she has been a reliable healthcare volunteer for the NCCU and Durham community. 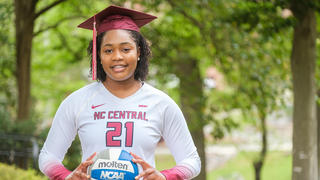 Transferring in from a private college, Sanders came seeking a university experience that included a family-like atmosphere. That’s what she found at NCCU.