The program, funded in part by a $100,000 Grant from the Elsevier Foundation, is in the field of implementation science, which studies the transformation of evidence-based findings into real-world applications. The NCCU team will be focused on ways that community-based interventions and health care innovations discovered through research can be applied in underserved communities to address health disparities.

“A lot of information coming out of labs and other research initiatives is evidence based,  but it takes so much time to get this new information implemented in the community,” said Deepak Kumar, Ph.D., director of the Chambers research institute. “By the time that it reaches them it may have lost some of its value or is too late for some patients.”

According to the National Institutes of Health U.S. Library of Medicine, it takes 17 years on average for new evidence-based information to make its  way into the routine practices of most clinicians. Patients with diseases that disproportionately affecting minority populations may be even slower to benefit from new findings, because less than 8% of the scientific community is composed of underrepresented minorities.

The Elsevier Foundation, which focuses on inclusive health and research programs, made the award for a one-year pilot program titled “Addressing Health Disparities through Implementation Science” and invited Kumar to apply for additional funding for years two and three of the program.

“The contributions of NC Central University’s Julius L. Chambers Biotechnology/Biomedical Research Institute in researching and combatting health disparities is truly impressive, and we are honored to support their efforts to embed and disseminate the practice of implementation science in North Carolina and beyond,” Elsevier Foundation Director Ylann Schemm said.

The Elsevier Foundation is a philanthropical organization funded by the global information health and science analytics company, Elsevier. The fund is geared toward advancing work in a number of areas including health, research and other areas where inequalities and disparities exist.

In addition, the foundation provides in-kind support to its partnerships such as data analytics expertise, through its relationship to Elsevier’s business.

“We are looking forward to supporting Dr. Kumar and his team to understand what Elsevier expertise, content, data and analytics can add to this valuable partnership, transforming research into solid, community-based interventions to tackle health disparities,” said Vice President for Education Content Kevonne Holloway, an alumna of NCCU.

Community advisory boards and focus groups will be formed to establish relationships and begin engaging communities in underserved counties of North Carolina. NCCU researchers will work with other experts in the region, including researchers at Duke University, or the University of North Carolina-Chapel Hill and RTI International, to support additional mentoring and networking efforts. Members of the core group will also attend workshops on the process of efficient deployment of evidence-based findings in clinical settings. 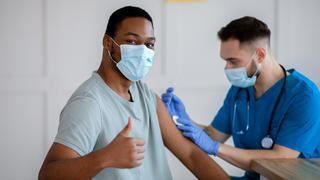 NCCU will offer both first and second doses of Moderna and Pfizer, and single-dose Johnson & Johnson vaccines, at walk-in visits and appointments on Tuesday, June 8, and Thursday, June 10.