The Treasure Room is located on the first floor of the James E. Shepard Memorial Library. Housed here is a rich collection of archival-related publications. The collection includes numerous works that were written during the Antebellum Period of American history. Many of the works are of a narrative perspective and are ideal for use as primary sources. Other items in the collection include anti-slavery pamphlets, nineteenth-century newspapers, and first editions of novels written by acclaimed authors such as William Wells Brown, Paul Lawrence Dunbar, Phyllis Wheatley, Charles W. Chestnutt, W.E.B. DuBois, and Countee Cullen, just to name a few.

In addition, representative works of many southern writers of the last century are also among the publications that comprise this valuable collection. The Shepard Library was fortunate to have received the valuable contributions of the Martin Collection, the personal library of Dr. Charles D. Martin. These titles donated to the Shepard Library in the first half of the century make up a significant portion of our archival collection.

Because of the archival nature of the collection, items that are shelved in the Treasure Room are not available for loan. Interested persons who hope to examine particular titles of interest should contact the Reference Department, located on the second floor of the James E. Shepard Memorial Library.

For more information, please call 919-530-6473 or send an email to the Research and Instructional Services librarian explaining your intent as it relates to materials located in the Treasure Room. 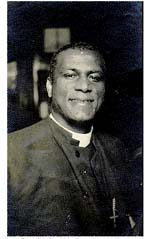 The Collection was assembled by the late Reverend Doctor Charles D. Martin, a West Indian Moravian minister. Dr. Martin was pastor of Beth-Tphillah, the fourth Moravian Church in New York, until the time of his death in 1942. He was born November 7, 1873, in St. Kitts, British West Indies, the son of Joseph and Adriana Martin. He attended church schools in St. Kitts and was a student at Nisky College, and Theological Seminary in New York.

In 1910, Dr. Martin married Ellen Patterson of Jamaica, British West Indies. He founded Beth-Tphillah, the fourth Moravian church in Harlem, New York, in 1908 and was ordained in 1912 as the only Black minister of the Moravian Church in the United States. He was a member of the American Academy of Political and Social Science and served as vice-president of the Negro Society for Historical Research. Dr. Martin was an avid book collector and admirer of Arthur Schomburg, who was the founder of the famous Schomburg Center for Research in Black Culture. Reverend Martin was noted for owning a large library of theological works, books on Black culture, and books dealing with West Indian and African culture.

Background Information
Dorothy Porter, supervisor of the Negro Collection at the Howard University Library, made the original contact about the availability of the Martin Collection to Miss Parepa R. Watson, librarian at the James E. Shepard Library. This contact was made around 1948. Mrs. Porter felt that North Carolina College needed to be included along with Howard University, Fisk University, and Atlanta University as having a special collection.

The Collection primarily dealt with the Negro in North America, the West Indies, Africa, and South America. In April 1948, the first letter was written to Mrs. Charles D. Martin regarding the interest of the College in purchasing the late Reverend Martin's collection. The Collection originally consisted of approximately 3,000 books and bound periodicals; 57 pictures; 3 African spears; and 2 African gowns. Mrs. Martin wanted $7,000 for the collection.

During the weekend of November 25–27, 1948, Dr. Farrison and Miss Watson went to New York to inspect the Martin Collection. Some of the books were in poor condition, because of dust and water damage; however, Dr. Farrison and Miss Watson felt that the Collection was still valuable enough for purchase. Some of the books in the Collection traced the experiences of Black Americans from slave narratives to the legacy of the Harlem Renaissance. They conferred their findings with Dr. Rush, Librarian of the University of North Carolina at Chapel Hill. He also agreed that the Collection would enhance the Library. In May 1949, a letter was sent to Dr. Alfonso Elder, president of North Carolina College, asking him to appeal to the Carnegie Corporation for help in purchasing this Collection. On March 23, 1950, the Martin Collection was received. Dr. Alfonso Elder described the Martin Collection as "... the nucleus for an extended program of study and research for the culture of Negroes in Africa, and in North and South America" (Durham Morning Herald, March 27, 1950).

Collection Arrangement
The organization of the Martin Collection began with Dr. W. Edward Farrison. He prepared an alphabetical card bibliography for the Collection. From 1951 to 1952, approximately 3,000 books were unpacked and placed alphabetically by title in the Treasure Room of the James E. Shepard Memorial Library. The books were divided into the following categories: Negroanna, Africana, and miscellaneous.

Presently, electronic records can be accessed through the OCLC terminals. Librarians, students, and researchers may gain access to these materials through online catalog systems. Some of the book titles found in the Martin Collection are also located in the Schomburg Collection. This kind of collection can be an asset to NCCU, as well as, any other historically Black universities and colleges. Therefore, improving the Collection is of the utmost importance.

The James E. Shepard Memorial Library University Archives and Records is an important resource for collecting, preserving, interpreting and explaining the history of North Carolina Central University and explaining twentieth-century African American history through material culture, the built environment, living memories and archival records. The archival area is the repository for documentary, photographic, and other materials of historic value to the college.