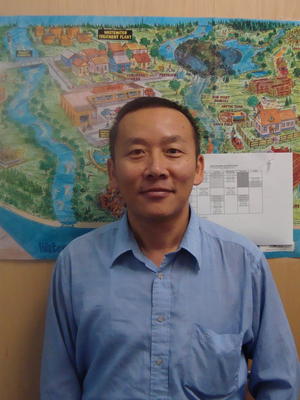 His research has been funded by NASA and NSF in the past years. He and Dr. Harris Williams collaborated with Delaware State University (DSU) and finished one NASA project entitled “Preparing Science Educators with Climate Change Literacy through Problem-Based Teaching and Learning ($188,952) between 2012–2014. The aim of the project was to train pre-service STEM teachers to have climate change literacy through problem-based teaching and learning activities such as curriculum integration, field teaching, seminars, workshops, symposiums, internships, and technical support. All the predetermined project milestones had been fulfilled by the end of project. A total of 2,061 students, including 627 pre-service teachers, received climate change education and training at DSU and NCCU project activities during the project.

Climate change education has been integrated into the curricula of 19 credit courses related to agriculture, biology, chemistry, earth science, geography, environmental science, and science education at DSU and NCCU. The teaching materials developed through the project (e.g., the Science of Climate Change workbook, a climate change survey questionnaire, an interactive learning module, videos, and lesson plans) have been used by educators as textbooks and training materials in classroom teaching and workshop training. A new credit course called "The Science of Climate Change" has been offered every two years at NCCU since 2013. The workbook developed through the project was used as the textbook.

Dr. Yang worked on one NSF project entitled “Investigating Optical Properties of Urban Aerosols for Monitoring PM2.5"($199,869) between 2015 and 2019. The objective of this study was to investigate optical properties of urban aerosols and develop a unique approach to retrieve PM2.5 at 1-km resolution from MODIS level 1B imagery and to effectively involve undergraduate students in scientific research. In this project, extensive ground AOD and PM2.5 measurements were conducted at five sites in Durham; in addition, meteorological data was collected.

Two graduate students and six undergraduate students were actively involved in each step of this project, from data collection to data analysis. They were trained to design experiments, operate instruments, process satellite imagery and write research reports. As a result, one graduate student and two undergraduate students won travel awards and were invited to attend the “National Emerging Researchers Conference” held by NSF. Through extensive research, a new AOD retrieval approach that addresses outstanding challenges of remote sensing applications to air particulate matter (PM) 2.5 monitoring has been developed and opened the path for PM2.5 monitoring through MODIS imagery.

Dr. Yang’s primary research interest is to examine and study the impact of human activities on the earth environment using geospatial technologies. Besides the projects mentioned above, he supervised several remote sensing studies on the Eastern Tennessee Seismic Zone (ETSZ) and the New Madrid Seismic Zone (NWSZ) using SAR images. The goal of these studies was to develop methods used to detect land deformation in the two seismic zones using the SAR Persistent Scatterer Interferormetry technique. Also, he is working on the monitoring of carbon dioxide and aerosols on campus using drone-based sensors.