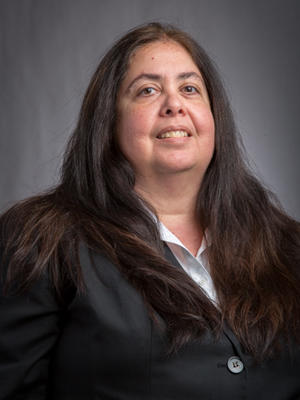 Professor Lopez is an associate professor in the Biological and Biomedical Sciences Department at North Carolina Central University. Her research interests include regulation of the hepatic LDL receptor and PCSK9 and the role of hypothyroidism in Alzheimer's disease and breast cancer.

Role of Hypothyroidism in Alzheimer's Disease
Alzheimer's disease is a progressive neurodegenerative disorder that currently affects more than 18 million individuals worldwide. Among the risk factors that have been described for this disease is hypothyroidism, the second most common endocrine disorder in America. Thyroid hormone plays a key role in the development and maintenance of basal forebrain cholinergic neurons typically involved in Alzheimer's disease. Furthermore, in vitro studies have shown that thyroid hormone regulates the expression of the APP gene, the precursor of A?, and the splicing of Tau protein at exon 10. Professor Lopez's research goal is to determine whether there is a direct relationship between hypothyroidism and the appearance of Alzheimer's disease markers.

Role of Hypothyroidism in Breast Cancer
Breast cancer is the most common cancer among women and the second leading cause of cancer deaths in women after lung cancer. Extensive research is currently underway to identify agents that could induce apoptosis in breast cancer cells facilitating therapeutic intervention and potentially improve outcomes for breast cancer patients. A hormone that could be useful in the induction of apoptosis in breast cancer cells is thyroid hormone. Hypothyroidism and low-normal free thyroxine are related to an increased risk of breast cancer in post-menopausal women and to a reduction in the response to treatment. In this project, the researchers are concentrating on determining the mechanisms involved in the control of breast cancer cell proliferation by thyroid hormone.

Effects of A1AT on PCSK9 Expression and Function