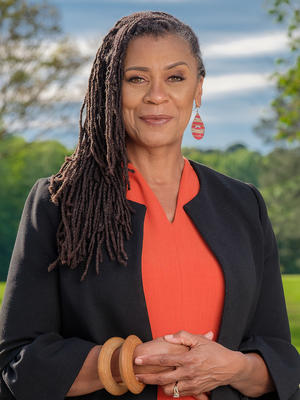 Chicago IL native, former U.S. Jazz Ambassador and twice appointed Fulbright Senior Music Specialist, Lenora Helm Hammonds is a global interdisciplinarian. Helm Hammonds is a recipient of the 2021 UNC Board of Governors Award for Excellence in Teaching. Her research is published by Springer, Routledge and Taylor-Francis and spreads across the intersections of intercultural maturity, jazz pedagogy and digital humanities. A tenured, Pi Kappa Lambda music honor society and Golden Key Honor Society Associate Professor in the Department of Music and Jazz Studies Program at North Carolina Central University (NCCU), she is the Honors Program liaison and president of the Kappa Psi Chapter of Pi Kappa Lambda in the Department of Music. Helm Hammonds is also an American Council on Education/Association of College and University Educator Certified in Effective College Instruction & Effective Practice Framework.

She teaches undergraduate and graduate courses in vocal jazz performance, ear training and songwriting and directs the NCCU Vocal Jazz Ensemble (12 voices and a rhythm section). Her demonstrated leadership is shown in conceiving, planning and implementing a number of academic and student initiatives. These initiatives include at least a half dozen faculty-led student study-abroad trips to Aruba, Brazil, South Africa and Batumi, Georgia, Eastern Europe, as well as the design and launch of a National Endowment of the Arts sponsored NCCU Teaching Artist Certificate program (the only one situated at an HBCU and one of two in the nation), an innovation in research-based arts education pedagogy.

From 2010, she led a 12-person international team authoring globally networked learning environments, pioneering the COIL (Collaborative Online International Learning) methodology for NCCU’s College of Arts & Sciences. This work lay a foundation for NCCU being the only HBCU in the GLOMUS (Global Network for Higher Music Dance and Performing Arts Education), a network of 23 international liberal arts universities (Glomus.net), some of with whom NCCU has global partnerships and MoUs. Of her many tributaries of arts education experience, before coming to teach at NCCU in 2005, she was a teaching artist for arts organizations including Carnegie Hall, Brooklyn Philharmonic, Schomburg Center's Junior Scholar's Program, Def Dance Jam Workshop and Young Audiences New York and was past president of International Women in Jazz, as well as a board member of New York Arts-in-Education Roundtable and GRAMMY in the Schools.

Helm Hammonds is a sought-after guest lecturer at international universities and conferences as a jazz education expert. Academic award highlights include being named a quarterfinalist for the GRAMMY® Music Educator of the Year award and a Salzburg Global Citizen Fellow as well as receiving the Mayors Award for promoting international understanding, a Duke University-NCCU John Hope Franklin Digital Humanities Fellowship, the 2018 Javett Music Award International Jazz Scholar at University of Pretoria, South Africa, a 2018 Lifetime Achievement Award from Marquis Publishing, and NCCU’s Excellence in Teaching Award (2017). In addition, she is receiving the highest faculty honor, the 2021 Board of Governors Excellence in Teaching Award for the UNC System.

Lenora’s dream for creating access to under-served global populations interested in vocal jazz education was realized in the creation of a library of online vocal training programs at www.LenoraHelm.online. She holds a Bachelor of Music in Film Scoring and Voice from Berklee College of Music and a Master of Music, Jazz Performance, Magna Cum Laude, from East Carolina University and is a candidate for a Doctor of Musical Arts in Music Education from Boston University. She serves on numerous national and international boards, including as the area leadership unit vice-president for the Jazz Education Network, a steering committee member for GLOMUS, and an incoming 2021–2022 board member of the NafME (National Association of Music Educators) Council for Jazz Education.

Her achievements in academia are matched by more than three decades as a recording artist. Professionally known as Lenora Zenzalai Helm, she is internationally acclaimed and continues to perform and tour as a jazz vocalist, vocal musicianship coach, composer, lyricist and big band bandleader. Her achievements include seven commercially released recordings, her own music publishing company, Baoule Works Music Publishing, and an extensive discography with internationally renowned names in jazz and contemporary music.

Her indie jazz record label, Zenzalai Music, was elected as a 2021–2022 BIMA Accelerator (Black Independent Music Association) recipient. Recent jazz composer awards include being the recipient of a 2021–2022 Chamber Music America Residency Presenting Jazz Consortium, awarded to present her 11-song suite, "Journeywoman," in virtual concerts in Pittsburgh, Virginia and New York, and selection as the composer of a new film score for the indie film "Native."

Her last three CD recordings—including "Chronicles of a Butterfly," produced by Branford Marsalis—reached the first round of GRAMMY voting for nomination consideration. Her sixth release, "I Love Myself When I’m Laughing," was listed on Independent Ear’s "30 Recommended Record Releases" amongst an esteemed list of jazz artists. Her newest project and seventh release is titled "For The Love of Big Band," and it reached the top-50 jazz recordings of international jazz list, JazzWeek, and features her newly formed ensemble, The Tribe Jazz Orchestra®. The project comprises twenty musicians, with three generations of men and women performing American jazz classics and contemporary favorites utilizing innovative instrumentation. Inspired to change the face of large ensembles usually lacking gender diversity, Tribe Jazz Orchestra is Lenora’s effort to bring together a diverse group of veteran and emerging musicians from around the globe, based in North Carolina. Married to Fred Hammonds, she is the bonus mom to two sons and ten grandchildren and makes her home in Durham, NC. Visit her at www.LenoraHelm.com.

Hammonds, Lenora. Technology and the Humanities in a Globally Networked Classroom: A Qualitative Study of Two Courses Taught Amongst Three Countries in the Performing Arts, INTED2014, Interlink Alliance. 2014.