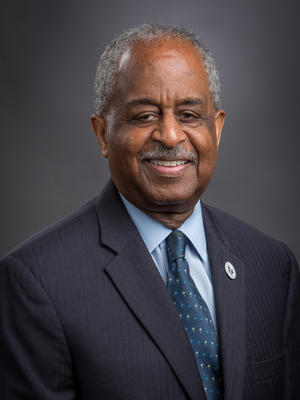 He has been an active public servant of Durham, NC, for 47 years. He was elected to the Durham County Board of Commissioners in 1972 and served for 26 years, chairing the board for 12 years. Bell was also the longest-serving mayors of Durham; his term ran from 2001 until 2017, with Bell choosing not to run for re-election in 2017. Bell also served in the military and reached the rank of first lieutenant in the United States Army Signal Corps.

Bell’s civilian work history reflects an extensive degree of education and experience as an engineer. He has worked in several large corporations, such as the Martin-Marietta Corporation (Orlando, Florida), the US Army Research and Development Lab (Ft. Monmouth, NJ), and the IBM Corporation in the Research Triangle Park (RTP), retiring in 1996. He currently is the executive vice-president and chief operating officer at the UDI Community Development Corporation.

Bell also serves on the North Carolina Railroad Company’s Board of Directors and the Mechanics & Farmers Bank City Advisory Board and co-chairs the Durham City Sesquicentennial Fundraising 2019 Campaign Committee. Bell has been awarded many honors, including the North Carolina Leadership Award in 1980, which was presented by Governor James B. Hunt, and the Order of Long Leaf Pine in 2016, presented by Governor Pat McCrory.

Mr. Bell and his wife, Judith, reside in Durham, NC.