North Carolina Central University (NCCU) will welcome 13 students to its Cheatham-White Merit Scholars Program in fall 2020 as part of the institution’s incoming class of 2024.

The third cohort of scholars hail from North Carolina, Indianapolis, New Jersey and Maryland. These academically-gifted students also boast the highest academic profile among all Cheatham-White Scholars to enter the program with a 4.42 GPA, 1307 SAT and/or 31 ACT.

“North Carolina Central University’s Cheatham-White Merit Scholars Program continues to thrive in its third consecutive year with diverse scholars who share a unified passion for community service, leadership and academics,” said Monica Leach, Ed. D., senior associate provost and vice chancellor for Enrollment Management and Academic Affairs. “We are excited to welcome the program’s newest cohort and witness their contributions to the NCCU community and beyond.”

Now in its third year, the four year-scholarship program was created with $3.2 million authorized by the North Carolina General Assembly for incoming students at NCCU and North Carolina A&T State University. The awards cover tuition, room and board, student fees, books, a laptop computer, supplies and personal expenses, including four summer experiences that could include international studies. The scholarships are named for Henry P. Cheatham and George Henry White, both African-Americans from North Carolina who served in Congress in the late 1800s and early 1900s.

Recipients of the 2020 NCCU Cheatham-White Merit Scholarship are:

Sana Azhar, daughter of Azhar and Tanzila Umer, hails from Durham, N.C. She, a member of the National Honor Society, will graduate from Durham School of the Arts, where she is also serves as secretary of the student council. She created a food drive effort for refugees that has been operating for more than three years. Sana plans to major in business and computer science.

Sydney Nicole Barron, daughter of Anissa and Keith Barron, is from Greensboro, N.C. She will graduate from the Early/Middle College at Guilford Technical Community College in Greensboro, where she is a leader in performing arts and a member of the ATLAS Robotics team. She is also an active member of the Superintendent's Student Advisory Council and has led the A/V ministry at World Victory church for four years. Sydney plans to major in biology and minor in Spanish.

Alexis Clagon, daughter of Chasity Whitehurst, is a Jamesville, N.C., native. She will graduate from Riverside High School where she is the senior class treasurer. She is also an active member of the National Honor Society, Interact Club and has participated in multiple service projects. Alexis plans to major in social work.

Kevin Contreras-Ruiz, son of Maria Ruiz Gonzalez and Vicente Contreras Corona, is from Durham, N.C. He will graduate from Josephine Dobbs Clement Early College High School where he has accumulated over 40 credit hours of college credits. Kevin is an active member of Student U, a community organization in Durham, where he volunteers as an interpreter for meetings or conferences, along with being a tutor. He plans to major in computer science.

Jayda Graham, daughter of Steven and Rose Graham, calls Indianapolis, Ind., home. She will graduate with honors from Lawrence North High School, where she is co-secretary for HOSA Future Health Professionals. She is also a member of the National Honor Society, Principal’s Advisory Council, National Technical Honor Society and National Spanish Honor Society. Jayda has volunteered with Dayspring Homeless Shelter for the past eight years. She plans to major in psychology.

Patrick Jacobs, son of Stephanie and Victor Jacobs, hails from Mount Laurel, N.J. He will graduate from Lenape High School where he is co-president of the Varsity Policy Debate Team and Politics Club, and serves as a member of the Principal's Student Leadership Team. Patrick is also an active member of his church, having served as an usher and leader in the technical arts ministry for over 10 years. He plans to major in both pharmaceutical sciences and physics.

Nia Martin, daughter of Walter and Duuna Martin Sr., is from Charlotte, N.C. She will graduate from Mallard Creek High School where she is the captain of the Mallard Creek varsity tennis team and a member of the Academy of Engineering, National Honor Society, National Technical Honor Society, National Science Honor Society and Health Occupation Student of America. She is an active member of the Girl Scouts, where she received a Silver Award. She received the gold award for the ACT WorkKeys. She is actively engaged in her church and is the secretary of the district and local Varick International Christian Youth Council. Nia plans to major in chemistry.

Aniya McFadden, daughter of Debbie and Warith Muhammad, and Corey McFadden, hails from Charlotte, N.C. Aniya will graduate from Mallard Creek High School. She holds leadership positions in her school’s Senior Class Council, Varsity Softball team and Key Club. She is also a regular volunteer at the Hope Church Food Pantry and held a part-time job since age 16. Aniya plans to major in psychology.

Joel Moscoso, son of Jaqueline Guerra, is from Durham, N.C. He will graduate from Josephine Dobbs Clement Early College High School, where he has been a very active member of Latinx Club for the past four years, as well as an occasional member of the Music Appreciation Club. Joel plans to major in physics.

Samuel Murchison, son of David and Nikki Murchison, hails from Siler City, N.C. He will graduate from Jordan Matthews High School, where he is a member of the varsity baseball team and played basketball his sophomore and junior year. He was also a junior marshal for his high school’s 2019 graduation and helped raise money for and built a batting facility for both the baseball and softball teams. Samuel plans to major in business.

Kyndall Ray, daughter of John M. Ray Jr. and Lawanda Sessoms Ray, is from Fayetteville, N.C. She will graduate from E. E. Smith High School where she is the student body vice president and the 100 Academy vice president. She is also an active member of the National Honor Society, Math and Science Academy, the Academy of Scholars and John Wesley United Methodist Church. Kyndall plans to major in biomedical sciences with a concentration in pre-med.

Naasir Smalls, son of Annette Smalls, calls Fayetteville N.C., home. He will graduate from Seventy-First High School where he is AFJROTC group commander and National Honor Society vice president. He is also a member of the band and volunteers at Carillon Assisted Facility. Naasir plans to major in mathematics.

Charity Smith, daughter of Marcus Smith and Sinetra Bowdry, is from North Beach, Md. She will graduate from Northern High School where she is president of the Future Doctors of America, and member of the National Honor Society, swimming team and track team. She has also participated on the school’s Softball team. She has participated in two travel softball teams - Rock Gold - Drew Brennan and the Lady Orioles Gold team. In addition, she has led the Pennies for Patients and Socktober fundraisers. She plans to focus on the sciences and get prepared for medical School. Charity’s current major is undecided. 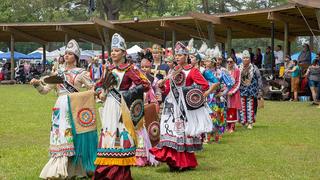 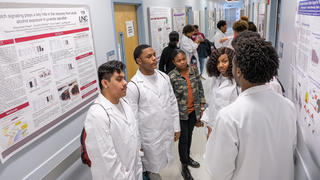 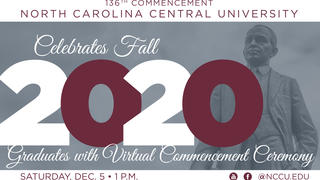