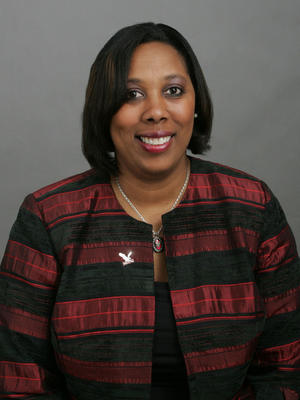 Ingrid Wicker McCree, EdD, began her appointment as the director of athletics at North Carolina Central University on May 1, 2008.

Dr. McCree, who joined the rank of only a handful of women athletics directors in the UNC system, previously served as NCCU's associate athletics director for internal affairs. Prior to her appointment as director of athletics, she served in a variety of leadership positions in both conference- and national-level organizations, most notably as president of the Central Intercollegiate Athletic Association (CIAA) Executive Board from 2004–2006, becoming only the second woman to ever hold that position in the league's history. In addition, she served as a member of the NCAA's Division II Legislation Committee from 2003–2007.

Dr. McCree was one of the driving forces behind NCCU's reclassification to NCAA Division I. From 1998 until her appointment as Director of Athletics in 2008, she oversaw the internal operations of the Athletics Department, including all compliance and eligibility programs.

Under her leadership, Dr. McCree has overseen more than $2 million in facility upgrades and renovations, including the installation of two new video scoreboards, locker room renovations, replacement of the original court in historic McDougald-McLendon Arena, new artificial turf and stadium seating in O'Kelly-Riddick Stadium, and the first nutrition fueling station in the L. T. Walker Complex.

Dr. McCree began her career at NCCU as the head coach for women's volleyball and softball. She became the first coach in NCCU history to win conference championships in multiple sports, capturing the school's first-ever CIAA titles in softball and volleyball. Dr. McCree is a three-time CIAA Volleyball Coach of the Year and former member of the NCAA Division II National Volleyball Committee. She was also inducted into the NCCU Athletic Hall of Fame in 2004 as head coach of the 1998 softball team. Dr. McCree was selected for induction into the CIAA John B. McLendon Hall of Fame in February 2016.

Dr. McCree has been the recipient of numerous awards, including the Outstanding Alumnus Award from North Carolina State University's Department of Parks, Recreation, and Tourism Management and the Women Leaders in College Sports’ 2014 NCAA Division I FCS Administrator of the Year Award.

In the fall of 2015, she was appointed to the board of advisors for the Center for Research in Intercollegiate Athletics at the University of North Carolina at Chapel Hill. In 2017, Dr. McCree was named to the NCAA Division I Council, a high-level group responsible for the day-to-day decision-making for Division I.

Dr. McCree began her coaching career as a graduate assistant coach for the women's volleyball program at NC State. She then spent two seasons as the head volleyball coach and student-athlete academic counselor at North Carolina A&T State University before returning to her hometown to begin her NCCU tenure in August 1994.