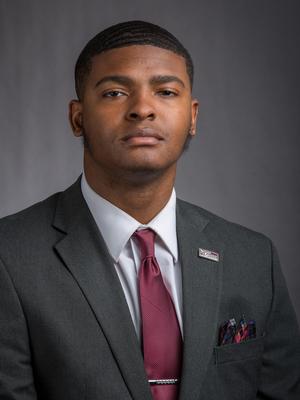 Mr. Hedgebeth was elected NCCU student body president in March 2019. Mr. Hedgebeth is from High Point, NC, and is a senior with a double major in history and English.

Prior to this appointment, he served as student body vice president and president of the Student Senate. He is a member of the University Honors Program, the Centennial Scholars Program, the Collegiate 100 Black Men, and the Pre-Law Society. He is a former Eagle ambassador and student orientation leader. He brings a wealth of accomplishments to the position, including the re-establishment of the Council of Presidents, student organization funding enhancements, and mandatory trainings for all senators.

As student body president, he continues to execute the SGA's agenda. Some of these major initiatives included SGA elections, NCCU Academic Day, and the culminating session of the UNC Association of Student Governments on this campus.